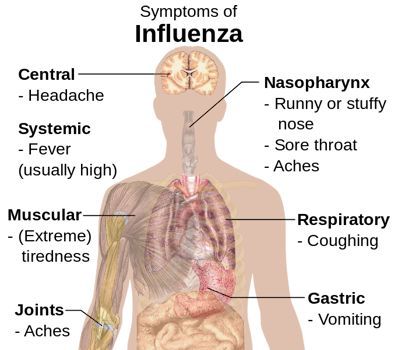 Seasonal influenza is an acute respiratory infection caused by influenza viruses which circulate in all parts of the world.

Seasonal influenza is characterized by a sudden onset of fever, cough (usually dry), headache, muscle and joint pain, severe malaise (feeling unwell), sore throat and a runny nose. The cough can be severe and can last 2 or more weeks. Most people recover from fever and other symptoms within a week without requiring medical attention. But influenza can cause severe illness or death especially in people at high risk (see below).

Illnesses range from mild to severe and even death. Hospitalization and death occur mainly among high risk groups. Worldwide, these annual epidemics are estimated to result in about 3 to 5 million cases of severe illness, and about 290 000 to 650 000 deaths.

In industrialized countries most deaths associated with influenza occur among people age 65 or older. Epidemics can result in high levels of worker/school absenteeism and productivity losses. Clinics and hospitals can be overwhelmed during peak illness periods.