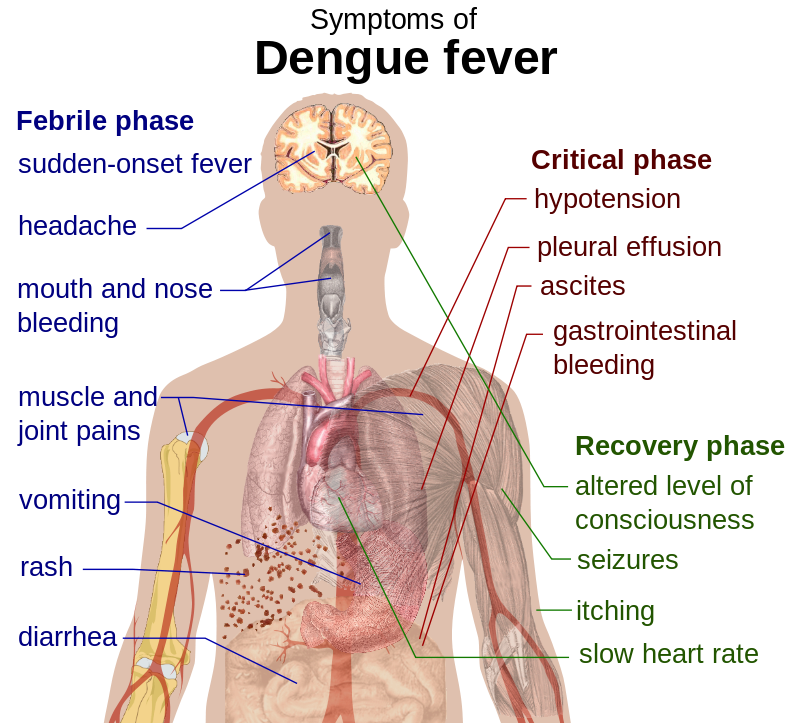 Dengue fever is a mosquito-borne tropical disease caused by the dengue virus. Symptoms typically begin three to fourteen days after infection. This may include a high fever, headache, vomiting, muscle and joint pains, and a characteristic skin rash. Recovery generally takes two to seven days. In a small proportion of cases, the disease develops into the life-threatening dengue hemorrhagic fever, resulting in bleeding, low level of blood platelets and blood plasma leakage, or into dengue shock syndrome, where dangerously low blood pressure occurs. Dengue is spread by several species

mosquito of the Aedes type, principally A. aegypti. The virus has five different types; infection with one type usually gives lifelong immunity to that type, but only short-term immunity to the others. Subsequent infection with a different type increases the risk of severe complications. A number of tests are available to confirm the diagnosis including detecting antibodies to the virus or its RNA.

A novel vaccine for dengue fever has been approved and is commercially available in a number of countries. Other methods of prevention are by reducing mosquito habitat and limiting exposure to bites. This may be done by getting rid of or covering standing water and wearing clothing that covers much of the body. Treatment of acute dengue is supportive and includes giving fluid either by mouth or intravenously for mild or moderate disease. For more severe cases blood transfusion may be required. About half a million people require admission to hospital a year. Nonsteroidal anti-inflammatory drugs (NSAIDs) such as ibuprofen should not be used. Dengue has become a global problem since the Second World War and is common in more than 110 countries. Each year between 50 and 528 million people are infected and approximately 10,000 to 20,000 die. The earliest descriptions of an outbreak date from 1779. Its viral cause and spread were understood by the early 20th century. Apart from eliminating the mosquitoes, work is ongoing for medication targeted directly at the virus. It is classified as a neglected tropical disease.

Typically, people infected with dengue virus are asymptomatic (80%) or have only mild symptoms such as an uncomplicated fever. Others have more severe illness (5%), and in a small proportion it is  life-threatening. The incubation period (time between exposure and onset of symptoms) ranges from 3 to 14 days, but most often it is 4 to 7 days. Therefore, travelers returning from endemic areas are unlikely to have dengue if fever or other symptoms start more than 14 days after arriving home. Children often experience symptoms similar to those of the common cold and gastroenteritis (vomiting and diarrhea) and have a greater risk of severe complications, though initial symptoms are generally mild but include high fever.

The characteristic symptoms of dengue are sudden-onset fever, headache (typically located behind the eyes), muscle and joint pains, and a rash. The alternative name for dengue, "breakbone fever", comes from the associated muscle and joint pains. The course of infection is divided into three phases: febrile, critical, and recovery.

The febrile phase involves high fever, potentially over 40 °C (104 °F), and is associated with generalized pain and a headache; this usually lasts two to seven days. Nausea and vomiting may also occur. A rash occurs in 50–80% of those with symptoms in the first or second day of symptoms as flushed skin, or later in the course of illness (days 4–7), as a measles-like rash. A rash described as "islands of white in a sea 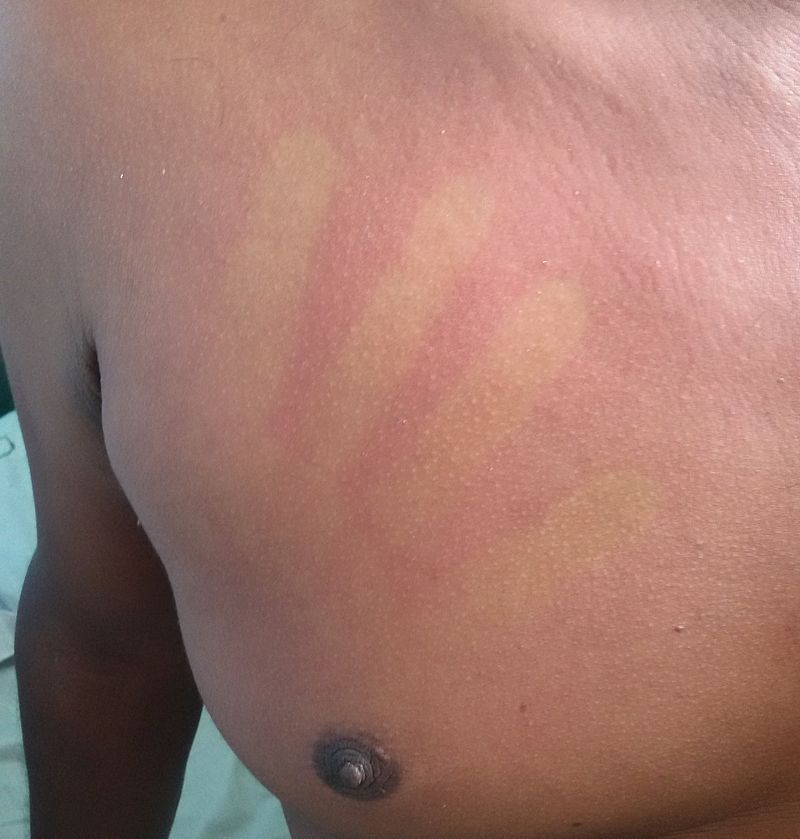 of red" has also been observed. Some petechiae (small red spots that do not disappear when the skin is pressed, which are caused by broken capillaries) can appear at this point, as may some mild bleeding from the mucous membranes of the mouth and nose. The fever itself is classically biphasic or saddleback in nature, breaking and then returning for one or two days.

The rash of dengue fever in the acute stage of the infection blanches when pressed. In some people, the disease proceeds to a critical phase as fever resolves. During this period, there is leakage of plasma from the blood vessels, typically lasting one to two days. This may result in fluid accumulation in the chest and abdominal cavity as well as depletion of fluid from the circulation and decreased blood supply to vital organs. There may also be organ dysfunction and severe bleeding, typically from the gastrointestinal tract. Shock (dengue shock syndrome) and hemorrhage (dengue hemorrhagic fever) occur in less than 5% of all cases of dengue, however those who have previously been infected with other serotypes of dengue virus ("secondary infection") are at an increased risk. This critical phase, while rare, occurs relatively more commonly in children and young adults.
The rash that commonly forms during the recovery from dengue fever with its classic islands of white in a sea of red. The recovery phase occurs next, with resorption of the leaked fluid into the bloodstream. This usually lasts two to three days. The improvement is often striking, and can be accompanied with severe itching and a slow heart rate. Another rash may occur with either a maculopapular or a vasculitic appearance, which is followed by peeling of the skin. During this stage, a fluid overload state may occur; if it affects the brain, it may cause a reduced level of consciousness or seizures. A feeling of fatigue may last for weeks in adults.

The dengue virus genome (genetic material) contains about 11,000 nucleotide bases, which code for the three different types of protein molecules (C, prM and E) that form the virus particle and seven other types of protein molecules (NS1, NS2a, NS2b, NS3, NS4a, NS4b, NS5) that are found in infected host cells only and are required for replication of the virus. There are five strains of the virus, called serotypes, of which the first four are referred to as DENV-1, DENV-2, DENV-3 and DENV-4. The fifth type was announced in 2013. The distinctions between the serotypes are based on their antigenicity.

Dengue virus is primarily transmitted by Aedes mosquitoes, particularly A. aegypti. The mosquitoes typically bite during the early morning and in the evening, but they may bite and thus spread infection at any time of day. Other Aedes species that transmit the disease include A. albopictus, A. polynesiensis and A. scutellaris. Humans are the primary host of the virus, but it also circulates in nonhuman primates. An infection can be acquired via a single bite. A female mosquito that takes a blood meal from a person infected with dengue fever, during the initial 2- to 10-day febrile period, becomes itself infected with the virus in the cells lining its gut. About 8–10 days later, the virus spreads to other tissues including the mosquito's salivary glands and is subsequently released into its saliva. The virus seems to have no detrimental effect on the mosquito, which remains infected for life. Aedes aegypti is particularly involved, as it prefers to lay its eggs in artificial water containers, to live in close proximity to humans, and to feed on people rather than other vertebrates. Dengue can also be transmitted via infected blood products and through organ donation. In countries such as Singapore, where dengue is endemic, the risk is estimated to be between 1.6 and 6 per 10,000 transfusions. Vertical transmission (from mother to child) during pregnancy or at birth has been 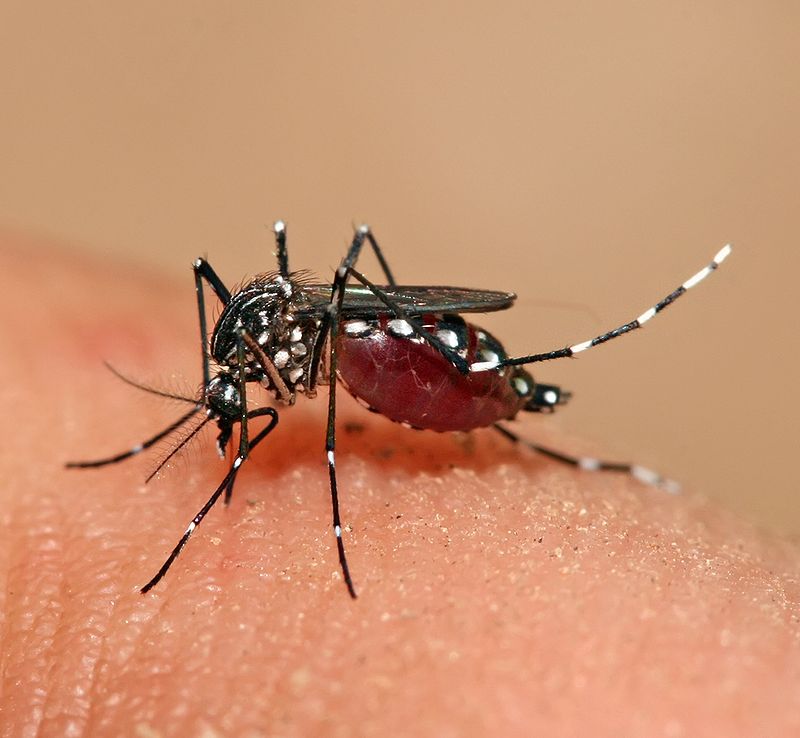 Other person-to-person modes of transmission have also been reported, but are very unusual.

If you are living or traveling in tropical areas where dengue fever is common, these tips may help reduce your risk of mosquito bites

The mosquitoes that carry the dengue viruses are most active from dawn to dusk, but they can also bite at night

There is no specific medicine to treat dengue infection. If you think you may have dengue fever, you should use pain relievers with acetaminophen and avoid medicines with aspirin, which could worsen bleeding. You should also rest, drink plenty of fluids, and see your doctor. If you start to feel worse in the first 24 hours after your fever goes down, you should get to the Lahore General Hospital immediately to be checked for complications.