Ebola virus disease (EVD), also known as Ebola hemorrhagic fever (EHF) or simply Ebola, is a viral hemorrhagic fever of humans and other primates caused by ebolaviruses. Signs and symptoms typically start between two days and three weeks after contracting the virus with a fever, sore throat, muscular pain, and headaches. Then, vomiting, diarrhea and rash usually follow, along with decreased function of the liver a 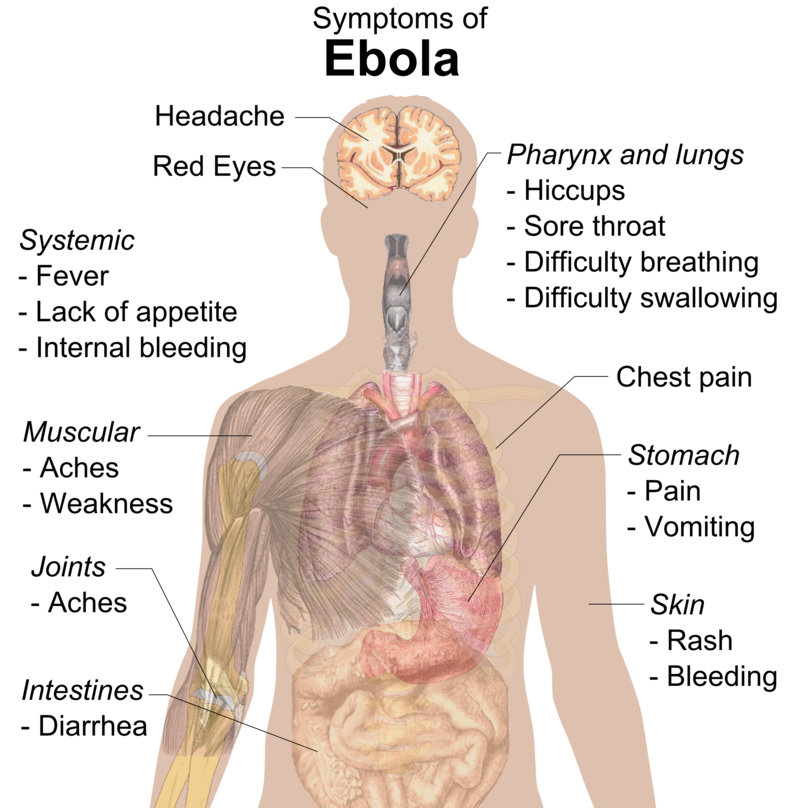 nd kidneys. At this time, some people begin to bleed both internally and externally. The disease has a high risk of death, killing between 25 and 90 percent of those infected, with an average of about 50 percent.This is often due to low blood pressure from fluid loss, and typically follows six to sixteen days after symptoms appear.

It is thought that fruit bats of the Pteropodidae family are natural Ebola virus hosts. Ebola is introduced into the human population through close contact with the blood, secretions, organs or other bodily fluids of infected animals such as chimpanzees, gorillas, fruit bats, monkeys, forest antelope and porcupines found ill or dead or in the rainforest. Ebola then spreads through human-to-human transmission via direct contact (through broken skin or mucous membranes) with the blood, secretions, organs or other bodily fluids of infected people, and with surfaces and materials (e.g. bedding, clothing) contaminated with these fluids. Health-care workers have frequently been infected while treating patients with suspected or confirmed EVD. This has occurred through close contact with patients when infection control precautions are not strictly practiced. Burial ceremonies that involve direct contact with the body of the deceased can also contribute in the transmission of Ebola. People remain infectious as long as their blood contains the virus.

More surveillance data and research are needed on the risks of sexual transmission, and particularly on the prevalence of viable and transmissible virus in semen over time. In the interim, and based on present evidence, WHO recommends that: