Middle East respiratory syndrome (MERS), also known as camel flu, is a viral respiratory infection caused by the MERS-coronavirus (MERS-CoV). Symptoms may range from mild to severe. They include fever, cough, diarrhea, and shortness of breath. Disease is typically more severe in those with other health problems. MERS-CoV is a betacoronavirus derived from bats. Camels have been shown to have antibodies to MERS-CoV but the exact source of infection in camels has not been identified. Camels are believed to be involved in its spread to humans but it is unclear how. Spread between humans typically requires close contact with an infected person. Its spread is uncommon outside of hospitals. Thus, its risk to the global population is currently deemed to be fairly low.

As of 2016 there is no specific vaccine or treatment for the disease. However, a number of antiviral medications are currently being studied. The World Health Organization recommends that those who come in contact with camels wash their hands frequently and do not touch sick camels. They also recommend that camel products be appropriately cooked. Among those who are infected treatments that help with the symptoms may be given.

The clinical spectrum of MERS-CoV infection ranges from no symptoms (asymptomatic) or mild respiratory symptoms to severe acute respiratory disease and death. A typical presentation of MER 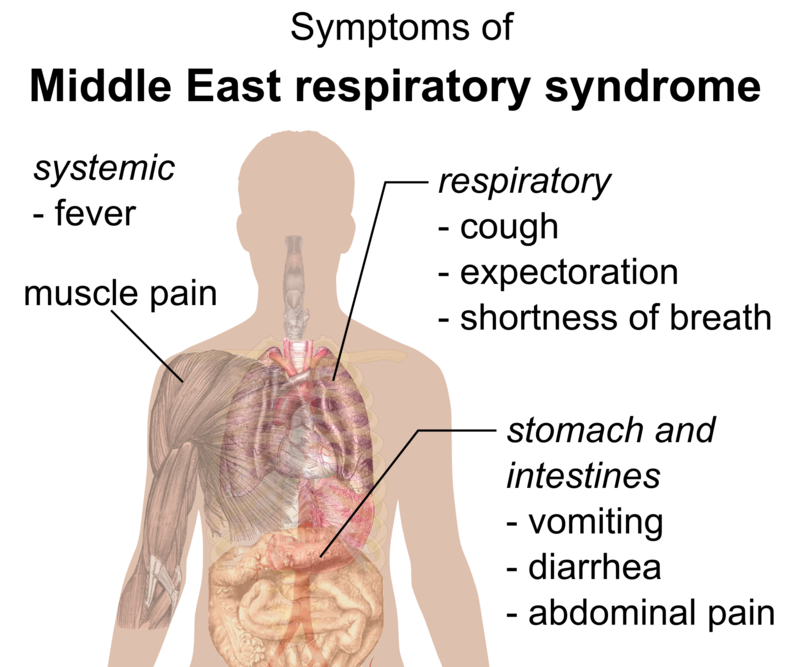 S-CoV disease is fever, cough and shortness of breath. Pneumonia is a common finding, but not always present. Gastrointestinal symptoms, including diarrhoea, have also been reported. Severe illness can cause respiratory failure that requires mechanical ventilation and support in an intensive care unit. The virus appears to cause more severe disease in older people, people with weakened immune systems, and those with chronic diseases such as renal disease, cancer, chronic lung disease, and diabetes.

Approximately 35% of patients with MERS have died, but this may be an overestimate of the true mortality rate, as mild cases of MERS may be missed by existing surveillance systems and until more is known about the disease, the case fatality rates are counted only amongst the laboratory-confirmed cases.

Source of the Virus

MERS-CoV is a zoonotic virus, which means it is a virus that is transmitted between animals and people. Studies have shown that humans are infected through direct or indirect contact with infected dromedary camels. MERS-CoV has been identified in dromedaries in several countries, including Egypt, Oman, Qatar, and Saudi Arabia, and MERS-CoV specific antibodies (a finding that indicates an animal has previously been infected with MERS-CoV) have been identified in dromedaries in the Middle East, Africa and South Asia. The origins of the virus are not fully understood but, according to the analysis of different virus genomes, it is believed that it may have originated in bats and was transmitted to camels sometime in the distant past.

Non-human to human transmission: The route of transmission from animals to humans is not fully understood, but dromedary camels are a major reservoir host for MERS-CoV and an animal source of infection in humans. Strains of MERS-CoV that are identical to human strains have been isolated from dromedaries in several countries, including Egypt, Oman, Qatar, and Saudi Arabia. Human-to-human transmission: The virus does not pass easily from person to person unless there is close contact, such as providing unprotected care to an infected patient. There have been clusters of cases in healthcare facilities, where human-to-human transmission appears to have occurred, especially when infection prevention and control practices are inadequate or inappropriate. Human to human transmission has been limited to date, and has been identified among family members, patients, and health care workers. While the majority of MERS cases have occurred in health care settings, thus far, no sustained human to human transmission has been documented anywhere in the world. Since 2012, 27 countries have reported cases of MERS including Algeria, Austria, Bahrain, China, Egypt, France, Germany, Greece, Islamic Republic of Iran, Italy, Jordan, Kuwait, Lebanon, Malaysia, the Netherlands, Oman, Philippines, Qatar, Republic of Korea, Kingdom of Saudi Arabia, Thailand, Tunisia, Turkey, United Arab Emirates, United Kingdom, United States, and Yemen. Approximately 80% of human cases have been reported by Saudi Arabia. What we know is that people get infected there through contact with infected dromedary camels or infected people. Cases identified outside the Middle East are usually traveling people who were infected in the Middle East and then travelled to areas outside the Middle East. On rare occasions, outbreaks have occurred in areas outside the Middle East.

No vaccine or specific treatment is currently available. Treatment is supportive and based on the patient’s clinical condition.As a general precaution, anyone visiting farms, markets, barns, or other places where dromedary camels and other animals are present should practice general hygiene measures, including regular hand washing before and after touching animals, and should avoid contact with sick animals.The consumption of raw or undercooked animal products, including milk and meat, carries a high risk of infection from a variety of organisms that might cause disease in humans. Animal products that are processed appropriately through cooking or pasteurization are safe for consumption, but should also be handled with care to avoid cross contamination with uncooked foods. Camel meat and camel milk are nutritious products that can continue to be consumed after pasteurization, cooking, or other heat treatments. Until more is understood about MERS-CoV, people with diabetes, renal failure, chronic lung disease, and immunocompromised persons are considered to be at high risk of severe disease from MERS-CoV infection. These people should avoid contact with camels, drinking raw camel milk or camel urine, or eating meat that has not been properly cooked.